Tiny The Great Dane Pup Visited us in Elk Grove

Tiny The Great Dane Pup Visited us in Elk Grove

Big dogs, little dogs and little dogs that are going to be huge dogs at http://facebook.com/dogandcatshots

We saw this young Great Dane at our Elk Grove vaccination clinic. His name is Tiny and that’s a good one because he is going to grow to be anything but tiny. Look at those huge lower legs and look at his head: He’s just getting to his biggest growth phase and soon he will be unrecognizably bigger than this. The Great Dane is actually a German dog (sometimes called German Mastiff) which derives from ancient Greek Molossers dating back to the 15th century BC! In the 16th century Europe the ancient dogs were crossed with English Mastiff and Irish Wolfhound with the intent of producing a larger boarhound. With the advent of firearms, the giant dog which could hold prey for the arrival of hunters was no longer necessary and their use has gradually turned to giant companion dog. Until the 19th century, these dogs were known as the German Boarding but political tensions with Germany prompted the name change to Great Dane. The tallest ever was Zeus who stood 44″ tall at the shoulder and lived until 2014. All Great Danes should stand at least 30″ tall which makes them easy to vaccinate because there is no need to even bend over to reach them! – Geoffrey Antipa 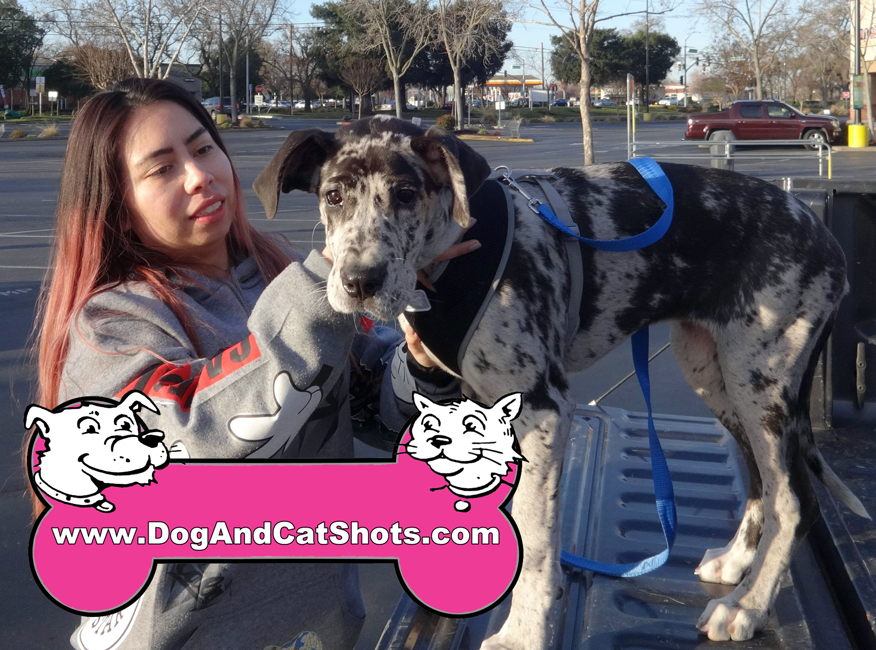