Buster The Great Dane Sure Has Grown In Just A Month!

Buster The Great Dane Sure Has Grown In Just A Month!

More dogs big and small, short and TALL at http://facebook.com/dogandcatshots

HEY!! We just saw this dog a month ago and he’s already three times as big now as he was back then. Buster is a Great Dane ‘pup’ who is rearing to go and who we’ve seen now twice at our Sacramento pet vaccination clinic in the College Greens area. He comes from a fine family of very big dogs and is in the phase where he is growing as fast as a weed in April and he can just barely eat enough to keep up with himself. There are Great Dane-like dogs on Egyptian monuments from 3,000 BC and on Greek frescoes dating to 1,500 BC. The breed as we know it dates to a 16’th century (AD) Europe and continued development to the 19’th century. The Great Dane is a surprising combination of size and good temper. They have earned the nickname ‘Gentle Giant’ because they are consistently good with people, families and other animals. Unfortunately, they are also known as the ‘heartbreak’ breed because they can suffer from congenital heart problems which may shorten their already short life span. We may expect an average Dane to live 6 – 8 years with some only lasting 4 years while a few make it to 10 yrs. As with all giant breeds, hip dysplasia can be a problem as can be vision and hearing. Guinness Record tallest dog is a Great Dane 44 inches from the ground to shoulder top. And one more thing . . . don’t we also recognize the guy on the other end of Buster’s leash? Yes, we do! YeiaSou Marko! – Geoffrey Antipa 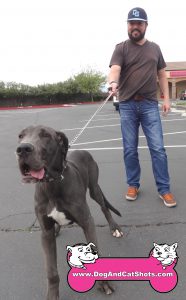